Manchester united came to Craven Cottage with confidence after their 0-0 draw with Liverpool, at Anfield, in their last game as they looked to regain the top spot in the league, after Leicester City replaced them after beating Chelsea. Fulham on the other hand were looking to bounce back after their 5 match unbeaten run was beaten by Chelsea last weekend.

🏹 We'll never get tired of seeing this!

The host lined up with 3-4-2-1, Lookman leading the attack while the visitors lined up with their preferred 4-2-3-1, with Cavani starting at central attacking role and Martial put up at Left Wing position and Rashford on the bench.

Surprisingly, it was Fulham who took the early lead at 5’ when Ademola Lookman drilled one past De Gea when he was provided a beautiful long ball by Anguissa from the right side. It was Fulham’s first goal at home in 4 games.

Pogba and Anguissa were both shown yellow cards at 10’ and 12’ respectively. United were trying real hard to find some gap in the Fulham defence. At 20’ Fernandes had a go but was unlucky as his left-footed shot hit the post. But just a minute later United found the equalizer they were looking for when Fernandes attempted a cross from left flank and Fulham keeper, Areola, couldn’t handle it and then it was Manchester United’s number 7, Cavani, who made it1-1 at 21st minute. Fernandes again tried a shot from outside the box but this time it was the goalkeeper who made an amazing diving save.

United and Fulham were both battling for the next goal but couldn’t find the net and the score remained 1-1 at HT.

The 2nd half started with some good opportunities for both sides. At 65’, Pogba produced a moment of magic when he picked the ball from the right flank and curled a fantastic shot into the far bottom corner with his left foot outside the box. What a brilliant goal it was! 2-1 united.

Fulham nearly made it 2-2 when Loftus-Cheek slipped into the United’s penalty box and forced De Gea to save with his legs at the near post. United were getting chances from the corner but couldn’t find the finish to the deliveries.

The host did not give up though, fought till the last minute but the game was well controlled by the Red Devils. It was a tough win for the Reds as they marched on to regain their top spot in the league with their 7th comeback win in PL this season. 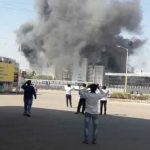