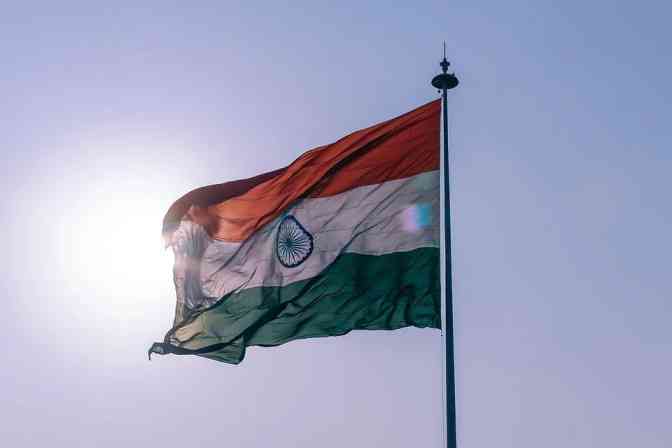 “Bharat Mata Ki Jai” when articulated, not only furnishes us with patriotic goosebumps but makes one feel an Indian, Oh! Wait. What should I say? An Indian or A Bharatiya. So, this as a whole is what my theme of expatiation in this article will be. The argument is not as austere as it seems to be since it has roots in the very past of our country. From what it is imparting, populace (when seen one-way) takes it as the mere subject of Hindi and English but the realism is far distinctive when scrutinised in a critical manner. There are diverse facets through which one can examine this subject but the essence of it lies in the traditionalism which relies upon the spiritualism of the people. Succinctly, the question I seek to answer in this article is that why must Bharat be the sanctioned name of our country and why must not India. (Hereinafter italicised Bharat and India will not be referred to as countries but mere words in the context of names).

Countries often espouse two names, First – that would be constitutionally documented and Second – perhaps a translation for those who are not contented or at ease whilst articulating the same. But if we deliberate in the context of bureaucracy “India” follows then it appears to be in a need of an overhaul as after Hindi being our mother language, the authoritative name used for our country’s documentation work as well as the name for itself is India i.e., apparently, not only an English word but within the ambit of English connotation. It is not only the Hindi and English language dynamic in Bharat and India I will be expounding about but the roots of their sense.

Nation can come of age only when it unshackles itself from Occupation history. ‘India’, a given name, can never resonate as deeply as ‘Bharat’- a name with cultural & historical power. This is not about renaming but about reclaiming ‘Bharat’ –Sg https://t.co/1sEvE2vJJv

Copious religious doctrines portray Bharatavarsha as the name of our country in them.[1] Quoting Vishnu Purana in this regard:

“This country is known as the Bharatavarsha since the times the father entrusted the kingdom to the son Bharata and he himself went to the forest for ascetic practices.”

Authenticity and Legitimacy of the word Bharat get defined when such type of sapiential dogma advocates for it, and undeniably a plethora of Puranas and Vedas strive to prove the originality of the same including Mahabharata, Jain Dharma, Rig Veda, etc.[2] If we deliberate the derivation of Bharat then there it appears too many theories though to some extent, those are interconnected but the irony is whatever assertions are in there places rationality before the reader. Bharat has been the name of our land from thousands of years as it depicts the denotation of our country in a broad mode within its all-encompassing words i.e. the country that lies north of the ocean and south of the snowy mountains. Indeed, according to Mahabharata, the terrains of the present countries including Pakistan, Afghanistan, China, Iran, Tajikistan, Uzbekistan, Kyrgyzstan, Russia, Turkmenistan, Nepal, Bangladesh and North-West Tibet were the inclusions of the then Bharat Empire which lay bare the power, wealth and prosperity, our country encompassed.

In addition, whilst the making of the constitution this subject attracted a plethora of members of constituent assembly under the chairmanship of B. R. Ambedkar to argue as this seemed an issue of fortification of our country’s standing. Hargovind Pant, for instance, contemptuously postulated that we should not feel attached or be fond of by the word which the alien rulers imposed on us for our own country without implying our ethicism and doctrinal history and that too for their delicate interest after being known to the riches of our country. He also tried to avow that persevering with India would exhibit weakness of us to other nations in an apparent manner.

Bharat is not just mere name to us it is what we got from the ancestors as a legacy and we can’t just turn off at its signification. Tersely, it bestows who we are, traditions, culture, religiosity and much more.

Unlike Bharat, India is a buildup which got modified repetitiously through generations and did not have a monotonous source as it lacked sempiternity.[3] The derivation institutes from Sindhu which is the name of the Indus River alluded in Rig Veda but the Arabs, Iranians and Persians pronounced “s” as “h”, therefore, baptized the country as the land of Hindus. On the contrary, a Greek Herodotus (5th Century BCE) enunciated Hindus as Indus and via Latin transliteration India and he also generalized the term “Indian” for the people living lower Indus basin.[4]Then finally the Latin word India came into use in Old English (between 5th and 12th century) but in mid 15th under French influence, it changed to Inde which entered modern English as Indie.

Furthermore, India took place in the English usage from the 17th century under Spanish or Portuguese influence and was also cited by “William Shakespeare”. The prolongation of India went on as it became the English reference to our land. Hereafter, the British rule materialised on our country and hence continually India got slammed to our country which in result has now stuck on as so-called proud name. Their definition of a slave was enounced as Indian and hence, they referred us as slaves, and this take can be traced way back in the 1800s.[5] Also, the making of the Indian Slavery Act, 1843 was only a move which sought to establish an official slavery structure in the name of so-called “Indentured Labour System” which the British passed.[6] Subsequently, slaves were being exported to slave markets of Central Asia and those who did not work efficiently were being punished inhumanely. The image of India got formed just as a slavish country.Yet India was included as the name of our country, and I strongly denounce this. We are born on this land and cannot be entitled other than Bharatiyas. “What Bharat means to us”, cannot ever be transpired in the minds of the populace unless India does not get scraped off completely.

A name is a principal individuality, be it a human being, object or, for that matter, a country and it must not mean in a mystifying but a distinct way. Bharat is relatively bonded to our land and that’s why the feeling of patriotism evokes whilst exclaiming “Bharat Mata Ki Jai” and is much natural than saying “India Ki Jai”. Seth Das Govind (as he then was) said, “India that is Bharat” are not beautiful words for the name of this country. We should have put the words “Bharat known as India also in foreign countries”. Now is the time to bring to bear these lines as they show wholeness in them.

Nevertheless, from what I sized up on this topic I conclude that the name India seems an impression bequeathed on us by the rulers and also a colonial relic. The argument put by Hargovind Pant was a truthful feature which needs to be reckoned by the legislature and judicature whilst processing of this subject presently.

Bharat is not just an appellation to give, but the rendition of our country. – Ritik Gupta